10 Most Weird and Funny Patents 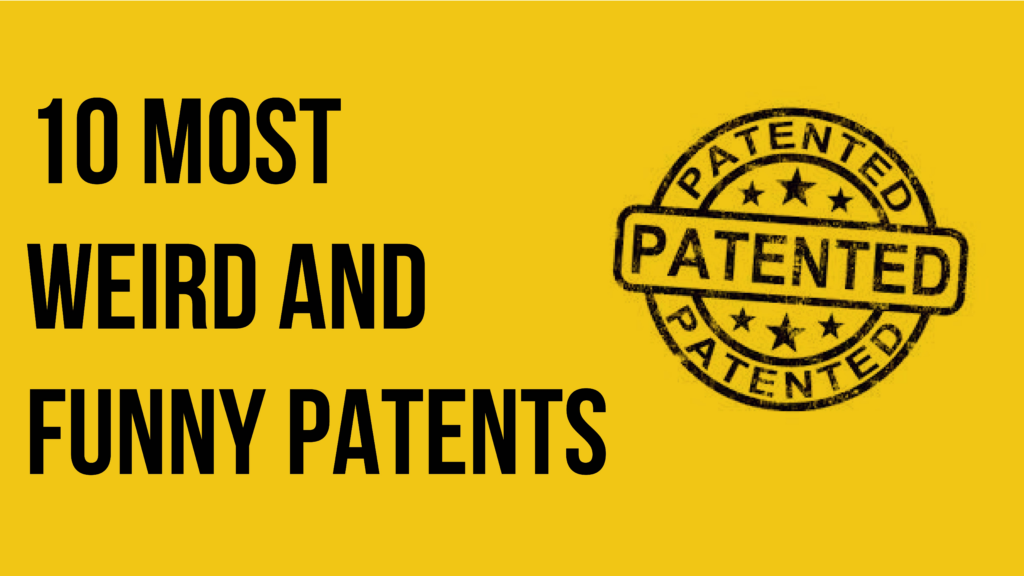 As we know that Patent is an exclusive right granted for an invention. The patented invention, as a technological advancement certainly brings benefit to society, sparks new ideas, and promotes new inventions. But at the same time, there are some unconventional invention which may not be technologically so advanced but their application in some manner is innovative and solve the day-to-day problem. We call such patents are called “Weird and funny patents”.

These out-of-the-ordinary patents have made one thing very clear that- “innovation knows no boundary”. It is important to note that weird inventions have also qualified the patentability criteria and has successfully accomplished the registration procedure to get the patent rights. Here through this article, we will bring to you some weird and funny patents that have widened the scope of the invention.

Starting with the Banana-Case, which was patented by the R. H. AIKEN, a resident of San Antonio, Texas in 1888. You may find it wired to hear about Banana-Case, but once you hear about the purpose of invention you may find its utility in our day-to-day life. The invention is to provide a case or crate in which bananas may be readily packed and transported without injury to the fruit. It consists of a body of cylindrical form made from one or more thicknesses of Veneer, the ends of which are firmly secured to two heads.

You may not have understood from the name of the invention which was patented by Brian J. Conanta and Myra M Conant of the United States. Let us tell you that it is an apparatus that helps to dampen fart and fart odour. It is commonly known as “Fart Pad”.  The invention discloses a pad to be worn by a person for absorbing gas due to flatulence (gas formed in the stomach). In this invention, the inventor used activated charcoal cloth as a deodorizer because it is so much more effective in removing odour than other known agents. The activated charcoal cloth filter is also washable and reusable. This makes the present invention the most effective, cost-efficient, comfortable, and least intrusive means of deodorizing gassy discharges.

In another invention related to buttocks Joe W. Armstrong of the United States has patented an invention apparatus for kicking the user’s buttocks. The object of the invention was to provide an amusement apparatus that is user-operated and controlled, and is designed to inflict repetitive blows on the user without resetting the apparatus and/or repositioning of the user between blows.

Around 135 years ago in 1890, R. P. HOLLINSHEAD, of the United States has patented an invention related to Mustache Guard. It was designed and adapted for use for suspending a gentleman’s mustache in order to keep the same up out of the way at the table, thus preventing the annoyance which so frequently is experienced in eating soups and other like foods, and in drinking tea, coffee, or other liquids by gentlemen having heavy mustaches.

Through this invention, patented by Eric D. Page in 2004, a person could take a rest while relieving themselves.  It’s hard to imagine someone would have thought of putting a headrest above the urinals. Though it cannot be denied that it was a good and new idea.

In 1923 Charles G. Purdy had invented an Exercising Device that can only be used with a partner. It is specially designed and constructed for exercising the teeth, gums, and all other organs which under a natural diet would receive their exercise through the act of mastication. The device is used by putting a metal plate between the teeth of two users which is connected by a spring device to each other. Through movements of the head, the device will receive a series of short jerks or impulses which will be transmitted to the teeth in order to produce a strain. Those strain serves to give the several organs of the mouth and head a proper exercise to maintain the necessary circulation therein.

For the comfort and maintaining hygienic amongst animals while eating food, James D. Williams has patented an Animal Ear Protector in the year 1980. This invention provides a device for protecting the ears of animals, especially long-haired dogs, from becoming soiled while it is eating. The device provides a generally tubular shaped member for containing and protecting each ear of the animal, and a member to position the tubular member and animal ears away from the mouth and food of the animal while it is eating.

It’s annoying when the sun heats up your child Beer. As a result, Mason Schott McMullin, Robert Bell, and Mark Andrew of the United States has taken the opportunity and patented a “Beerbrella” in 2003, where an umbrella is attached to a beer bottle to Shade the beverage container from the direct rays of the Sun. It may also be used to prevent rain or other precipitation from contaminating a beverage.

Samuel S Applegate, of the United State in 1882 brings a device that can save you from alarm sound or can save you from the situation when you becomes so accustomed to the noise that sleep is not disturbed when the alarm is sounded. Yes, he has patented a device for waking persons from sleep by the use of a lightweight frame. The device requires a lightweight framework to be hung over your head which is connected to automatic release by a cord, so that at the proper time permitted it falls on your face. The inventor makes sure that the frame is light enough to “wake the person sleeping, but not loud enough to cause pain.”