The Pride Rainbow Flag: An Story of Free-Use and IP Waiver 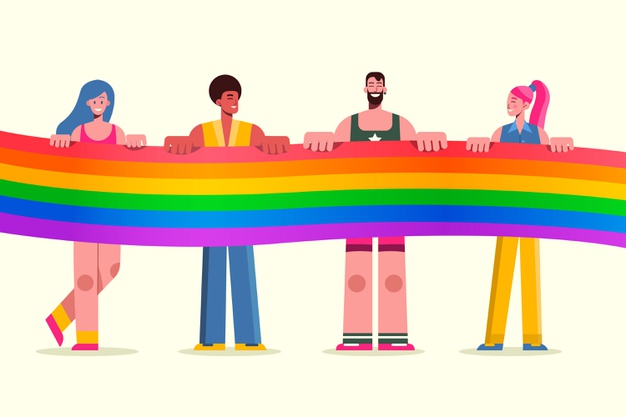 In the last few days, you must have seen giant industries or corporations like PUMA, The Walt Disney Co., IBM, and many more companies changing their logo or trademark. And if you have not seen it, then let me tell you that in this change, companies have designed their original logo or trademark in the colors of the rainbow. Let us now tell you why they have done this.

The month of June is considered as a symbol of solidarity towards the people of the LGBTQ community. Gay parades are organized in different parts of the country by the LGBTQ community for their self-assertion, self-respect, equal opportunity, and increased visibility as a social group. It was first started by Thom Higgins, a gay rights activist in the year 1969 in the city of New York. Thereafter, to make this show grander, a kind of flag, which looks like a rainbow was used to unite the people of the LGBTQ community to fight for their rights and keep them together.  In 1978, as soon as the rainbow flag was used for the first time, it made its own identity from which we would know that it is associated with the LGBTQ community.  It was not that a flag similar to the colors of the rainbow was being used for the first time. Before this, it was also used for the different native ethnic and cultural group (as Andean indigenism during 18th century), political group (the Armenian Republic in 1919), and religious group (Buddhist in 1885). But due to its special features, this time its use for LGBTQ Community became popular all over the world.

Being an IP Professional, my attention got on whether other companies can use this rainbow color flag without the creator’s permission. Let us find the answers to these questions through this article.

Figure 01: The three giant of their fields have designed their logo/trademark in the colours of Rainbow to support the LGBTQ Community

In 1988 Gilbert Baker, an American artist and gay rights activist has created the Eight-Stripes Rainbow flag. It was first used by the creator himself during San Francisco Pride parade and festival on June 25 1978 and becomes has since become the universal symbol of LGBTQ Pride. The different colours symbolize and indicate different nature and characteristics associated with the LGBTQ Community. ________

The Eight-Stripes Rainbow flag has been modified to Six-Stripes Rainbow Flag by removing two colours: Hot Pink and Turquoise. It was believed that Baker has to remove Hot Pink Colour when he decided to produce the flag at commercial scale. This happens because the availability of the Hot Pink colour was too rare and that makes the production of flag expensive to include Hot Pink colour. For the practical reason, Turquoise colour has been removed when San Francisco Lesbian, Gay, Bisexual, Transgender Pride Celebration Committee decided to fly the flag in two halves during the 1979 Gay Freedom Day Parade. So, after removing Hot Pink Colour, now the Turquoise colour has been removed and it becomes became a six-striped rainbow flag with equal halves. Since then, the six-stripes rainbow flag is commonly used worldwide.

The two requirements for the registration of a mark which has been widely accepted by all the Trademark Office in the world are:

When the Rainbow flag is put upon the scale of the above two requirements, it is obvious that yes the mark can be graphically represented. Secondly, the worldwide use of the Rainbow Flag has no doubt acquired distinctiveness that the Rainbow Colour mark is associated with the LGBTQ Community. Thus, if Baker has ever wished to register the trademark he may get the registration for the rainbow colour flag.

Being an artistic work of Gilbert Baker, the rainbow colour flag also qualifies for the protection under the Copyright Law. Gilbert Baker’s work communicates an original expression of thought and thus be eligible for the copyright protection.

But Baker have different plans

Though Gilbert Baker has the option to protect the rainbow colour flag under the Law of Trademark or Copyright, but instead of protecting it he has hired a Counsellor to make it use freely without any legal repercussion. Gaining the widespread popularity, the various LGBTQ advocacy organisation has made an attempt to register the rainbow colour flag as a trademark. The creator Gilbert Baker has hired Matt Coles, a young LGBT civil rights attorney, to block the attempt of various organization to register rainbow colour flag as a trademark. It was reported that Baker told Matt Coles, that he has created the flag for the “free and open use” by the public. In this way, Baker has waived his Intellectual property right in his creation.

Certainly, the free use policy adopted by Baker has made the flag popular worldwide. Otherwise, it could have not attained so much popularity if protected. Since in that case, its use is restricted to authorization and license to use.

Is there any Flag that got IP Protection?

There is some flag that has acquired IP protection through Convention, charter, or statute. Like, the Olympic Charter that prohibits the unauthorized use of Olympic Properties includes Olympic Flag and thus it is internationally protected. Similarly, the United Nations Flag Code prohibits the use of the flag for commercial purposes or indirect association with an article of merchandise.

Figure: 02 Olympic, Red Cross and UN Flags are amongst those flag that enjoy some level of IP Protection

From the above discussion, it is clear that the creator of Rainbow Flag Gilbert Baker has waived his IP right and allowed free use of the flag by the public. That means, any person or organization, is free to use the mark both for commercial and non-commercial purpose. This is the reason that companies like PUMA, The Walt Disney Co., IBM, etc. have been freely using the rainbow color logo to show the solidarity towards LGBTQ community. Thus the only requirement that seems to appear for the use of the rainbow colour flag is that the users must show that they support the LGBTQ+ community. Though, it could not be possible in all the cases to enforce the use of the flag in the interest of the LGBTQ Community.