Into the World of 3D Printing or Three-dimensional printing 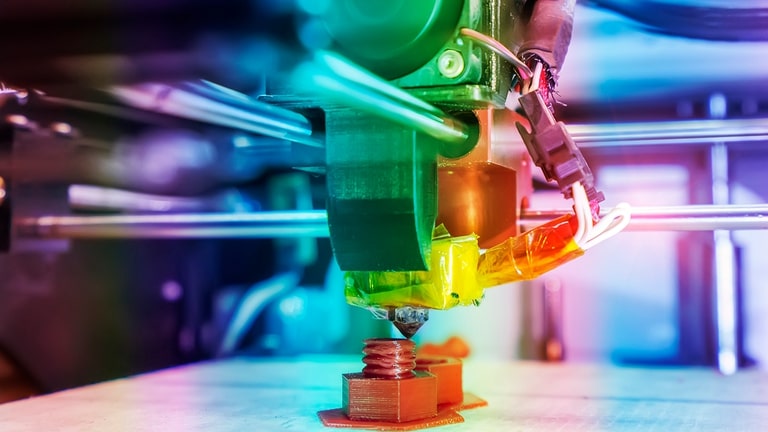 Three-dimensional (3D) printing is a preservative manufacturing technique that transforms a digital template into a physical object. The method involves laying down thin layers of material, such as liquid or powdered plastic, metal, or cement, and then fusing them together.

3D printing technology has also improved manufacturing productivity since its launch. It has the potential to disrupt both the manufacturing logistics and inventory management industries in the long run, especially if it can be successfully integrated into mass production processes.

At the moment, 3D printing speeds are too slow for mass manufacturing. The technology, on the other hand, has been used to minimize the time it takes to produce prototypes of parts and products, as well as the tooling needed to make them. This is particularly advantageous to small-scale producers because it decreases their prices and shortens their time to market (the time it takes for a product to go from idea to market.

• Three-dimensional (3D) printing is an additive manufacturing process that involves printing thin layers of material and then fusing them together to create a physical object from a digital template.
• Hearing aid suppliers, airline manufacturers, and automotive manufacturers, for example, use custom scans to build prototypes and mass produce their products using 3D printing.
• Although 3D printing technology is still too slow to be used in mass production, it is still emerging and has the potential to significantly disrupt the manufacturing logistics and inventory management industries.

Automobile and aircraft manufacturers have led the way in 3D printing, transforming unibody and fuselage design and development, as well as powertrain design and production. Boeing’s 787 Dreamliner airliners use 3D-printed titanium parts in its design. 3D printers have been used by the US and Israeli air forces to produce spare parts. In 2017, General Electric produced a helicopter engine with just 16 parts instead of 900, showing the possible effect of 3D printing on supply chains.

3D printing is being used to customize implants in the medical field. Organs and body parts can be produced using 3D printing techniques in the future. Nike, Adidas, and New Balance are among the luxury companies that use 3D printing to create shoe prototypes. Companies all over the world are breaking new ground in the building industry by 3D printing the materials needed to build houses. Homes can be constructed in 48 hours using layers of concrete, which are stronger than standard cinder blocks and cost a fraction of the amount.

3D printing is now commonplace in the production of hearing aids. The use of 3D printing speeds up the production process and allows manufacturers to create personalized hearing aids. Audiologists may use 3D scanners to create a personalized prototype based on the scan’s reference points. Manufacturers will feed the scan into a 3D printer and print the entire hearing aid after fine-tuning the materials and ear shapes.