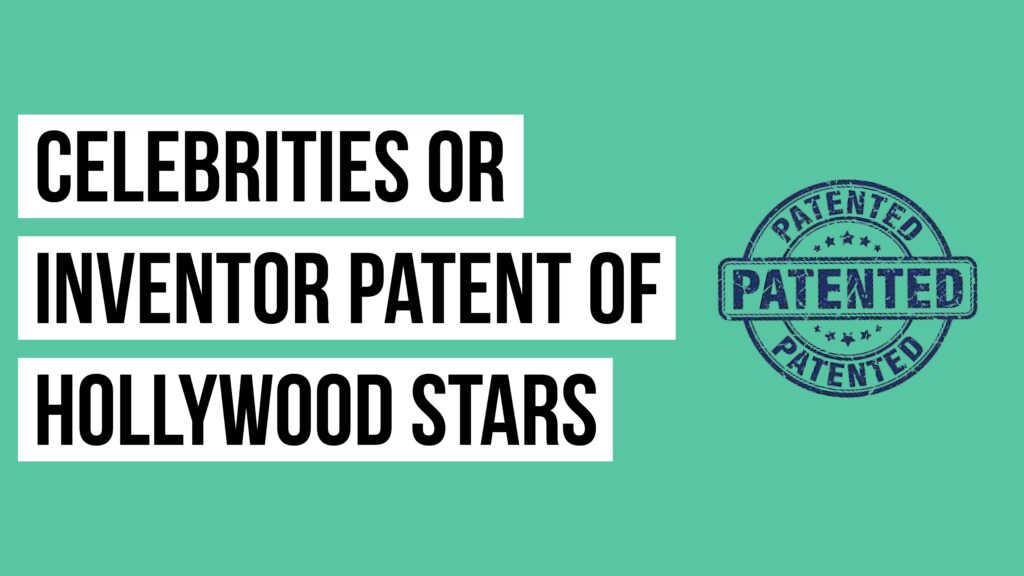 In 1903 when Hollywood was incorporated as Municipality who would have thought that it will emerge as a prominent film industry and have worldwide recognition. Though, if one could look over the activities during 1908-1910 when 30 motion-picture companies began to set up production they might have an idea that it was going to be commercial land for filmmakers. However, it is damn sure that no one would have thought that Hollywood with infectious charm and media glare can also contribute to the field of science and technology. Yes, you heard it right, many Hollywood celebrities have contributed in the field of science, technology, and patents.

When we talk about innovation and invention, it crosses our mind that someone with fizzy and dry hair is bustling in their invention factory for new ideas and invention. This traditional belief makes arduous to accept that celebrities can also be an inventor. The Hollywood film celebrities are amongst them who are great observers and innovators. They had also broken down patent myth barriers that patent applications can only be filled by scientists and inventors.

In this blog, we will talk about Patents applications filled by the different Hollywood Celebrities where some of the inventions were related to their work while others are offshoots of hobbies or just a single great idea. It means invention and creation do not require any degree, you just need a single great idea that can be converted into invention. So without going into depth of idea, invention and patent, let’s begin with the most famous celebrity’s name who has got patent in their name:-

Yes you heard it right Michael Jackson hold a patent. Awarded jointly to him and two of his costume-men in 1993, the patent described specially designed shoes that gave the illusion of his leaning beyond his center of gravity. The move and the associated gadget were created for his 1988 music video, Smooth Criminal. For decades, the whole world has wondered how Michael Jackson and his dancers were able to lean at a 45-degree angle without falling. The trick to the move is these anti-gravity shoes which were patented with the USPTO in 1992.

Yes! Rapper, producer and designer, Kanye Omari West is listed as an inventor on the 2013 application for his invention titled “Multiple Screens for Immersive Audio/Video Experience”. He patented this audio-visual viewing system in which screens are placed not only in front, but also on the side walls, ceiling and floor, to generate a sense of immersion for the audience. It could be used for cinemas or art installations, for example. The layout of the screens takes on a pyramidal shape from the outside according to the patent it can be used in various sizes and solutions.

The American director and producer, Steven Spielberg has two patent in their name. The first invention is related to “Switching Device” that allows to film a scene from one perspective, and then switched quickly, easily and smoothly to an intersecting, transverse path for continued filming of the scene from another perspective without the need to stop the recording. The second invention is related to the Method and apparatus for annotating a line-based document. It protects a system enabling multiple users to attach verbal comments to a line-based document, such as a script or a book. This patent was issued by the USPTO in January 2012 to Academy Award-winning director Steven Spielberg, as well as co-inventor Samuel Gustman.

Aside from the press writing about his incredible musical talent, many stories appeared about Eddie Van Halen the inventor. Van Halen received US patnet titled “Musical instrument support,” (also known as Guitar Solo Support) which issued on April 14, 1987. This is a great example of celebrity patents that highlight a notable moment in a person’s career – in this case one of the best-known guitar solos of all time!

In 1987, the actress Jamie Lee Curtis was fed up with carrying wipes and diapers separately when both items are normally needed at the same time. So, Curtis patented this invention named Infant Garment, in which takes the form of a diaper including, on its outer side, a sealed, but openable, moisture-proof pocket which contains one or more clean-up wipers with a soft material to ensure the comfort of the baby.

6.Francis Ford Coppola for Garment for identifying location on body of the garment wearer [US20060191053A1]

This curious invention came from film director. Francis Ford Coppolo. It discloses a garment having printed thereon a figure comprising uniquely identifiable regions that when worn permit the wearer to identify for a third party a particular location on the wearer’s body. The idea is to be able to quickly indicate what portion of a person’s back is etching so that another person can help.

She is an American model, actress, and entrepreneur. Christie Brinkley landed on the cover of the Sports Illustrated Swimsuit Issue a record three consecutive times — in 1979, 1980 and 1981 — but she’s much more than just a pretty face. In 1991, Brinkley was granted a patent for a children’s toy that uses components of different shapes and sizes to create letters of the alphabet.

In 2003, he patented this model train with lights, smoke, sounds and a series of technological advances that improve the dynamics and movement of the train resulting in a more realistic experience.