Duties of the Director of the USPTO 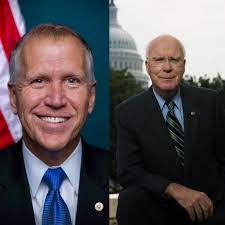 Senators Thom Tillis (R-NC) and Patrick Leahy (D-VT) sent a letter addressed to Drew Hirshfeld, performing the functions and duties of the Director of the USPTO.

On 9th September, Senators Thom Tillis (R-NC) and Patrick Leahy (D-VT) sent a letter addressed to Drew Hirshfeld, performing the functions and duties of the Director of the U.S. Patent and Trademark Office USPTO, discussing the issue of inconsistent statements made by patent applicants pursuant to their disclosure requirements at the USPTO and other federal agencies, especially the U.S. Food and Drug Administration (FDA).

The letter argued that the practice of contradicting statements about the applicable state of the art would affect patent quality and competition. In some instances, a drugmaker will make representations about prior art medicines to the FDA in order to secure market approval by arguing that their versions are essentially the same as previously approved drugs or medicine. In the US Patent and Trademark Office, however, these drug makers would make conflicting arguments and claim that the state of the art was different in order to protect patent rights and avoid novelty or obviousness problems. The Senator urged Hershfield that such contradicting statements should be the reason for the denial of patent applications and could even impose further sanctions on patent applicants with bad intentions.

“We strongly believe that improving patent quality will increase competition and drive economic growth. We also believe that strong intellectual property rights play an important role in the development of biopharmaceuticals, biosimilars, and treatments that save millions of lives every single year. However, in order to be entitled to strong intellectual property protections, a patent must meet all the requirements of patentability, including being non-obvious and not anticipated by any prior art.” Mentioned by Senators Thom Tillis and Patrick Leahy in the letter addressed to Drew Hirshfeld.

The Senators and Patrick are requesting that the USPTO make a quick move to guarantee that candidates are revealing all known earlier art at both the USPTO and the FDA.

Belcher, Bruno Independent had contended to the Federal Circuit that the earlier art revealed to the FDA was total of the prior art submitted to the USPTO, however the Federal Circuit found that retained references unveiled a front offset turn that would have kept Bruno Independent from making certain claims about the development’s novelty if the analyst knew about the earlier art.