THE RISE AND FALL OF KODAK 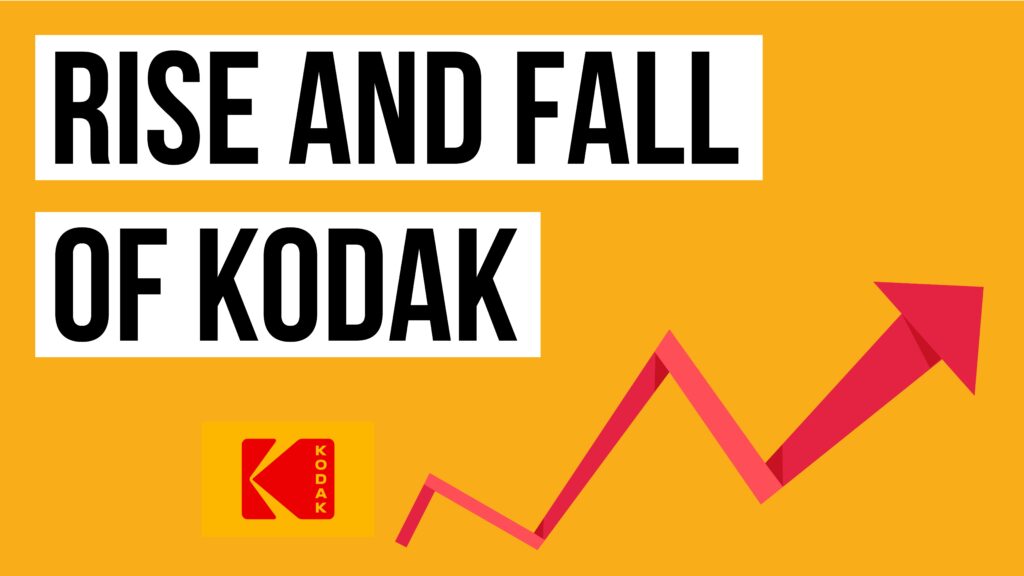 It’s 1994, you are on a vacation with your family in Manali. Your father tells you to pose with your brother in front of a famous temple to click a picture of you two. He brings out the camera from his bag and holds it near his eye and *click* he captures you both smiling and having fun. When you return home, your father takes out the film from the camera and gives it to get the pictures printed. You keep those photos safe with you and to cherish the moments for an eternity.

What do you think has had the biggest role in capturing our childhood so perfectly? Is it the phone cameras, digital cameras or the film cameras? Yes, it’s the camera with the film.

The Rise of Kodak

The first film camera was invented by George Eastman in 1888 that he named Kodak. He intended to make a camera that anyone could conveniently operate, and thus began the era of film cameras. His invention led to simplistic ways of clicking a picture and henceforth, photography was no more a part of the professional domain only.

Once known as the “Gorilla of the Photography World,” Kodak controlled almost 70% of the highly lucrative US film market. The gross margins on film ran close to 70%, and its success was further underpinned by a massive distribution network and one of the strongest brands in the world. In 1962, Kodak hired 75,000 people and pocketed more than $1 billion in the US film market. The position that it achieved in the field it had solely created on its own was a product of 70 years of blood and sweat. It had the absolute supremacy in the market.

The Fall of Kodak

The company that had ruled the market for decades, filed for Bankruptcy Chapter 11 in the January of 2012. It sold of its patents and made a comeback in 2013 as a much smaller company having a share of less than $1 billion in the US market. But what is it that a huge company like Kodak had to see such a decline in its business?

With the advent of digital cameras, a steep decline of film cameras could be seen. What would surprise one the most is that the first digital camera was built by Kodak itself. An employee of the company, named Steve Sasson, invented the revolutionary device in 1975. The camera took 20 seconds to capture an image, produced them in low quality and could be watched on a television with the help of complicated wiring. But Kodak was unable to see the potential of the invention and hence refused to invest in the it, as it would hamper the sale of its initial invention – film.

The digital cameras almost inevitably replaced the film cameras and fitted into people’s lives like a missing puzzle piece. Since, digital cameras are much easier to operate and give good quality photographs, and you also don’t have to spend on film every now and then, it became a favourite of people. Gradually the new age phones came with a camera too due to which the curve of digital cameras had to face a downside too. However, digital camera enthusiasts still exist, but the use of film cameras is nowhere to be seen.

Kodak was blindfolded to see the potential a digital camera will hold in the coming era. It kept itself fixed on manufacturing film cameras and continuing the century old traditional photography methods. But in an era where Internet had taken birth, sharing pictures online was much more preferred than printing them and keeping them secured in a photo album.

In 2001, before any of the social media platforms was even invented, Kodak bought a photo sharing platform called Ofoto. Their major intention was to encourage people to print the digital images. If only it had utilized that opportunity to turn it into a photo sharing platform, Kodak would have created history yet again. Ofoto was sold to Shutterfly in April 2012.

Even after them filing for Bankruptcy Chapter 11, Kodak had hopes of a second chance by reestablishing itself by selling all of its 1700 patents, worthy of about $4.5 billion. But eleven months later, when they were sold, the company could only acquire $94 million. The rest 20,000 patents were distributed to several companies for only $433 million.

Kodak used to spend up to $500 million yearly on R&D of its innovations. The company developed the first megapixel image sensor, which went into Apple’s groundbreaking QuickTake digital camera, and it came out with the first cameras with OLED screens and built-in Wi-Fi. Kodak had collected about 22,000 patents and other IP, by 2012, which covered 160 countries. From 2003 to 2011, licensing IP to other companies had earned Kodak over $3 billion. The patents had a worth of in billion dollars as google, Microsoft and Apple were interested in buying them.

In July 2011, Michael Lasinski’s firm was made in charge by Kodak to value 1730 of its patents. In July 2012, 20 bidders, all highly known brands, showed interested in an auction of the patents. A few days before filing for bankruptcy protection, Kodak filed lawsuits against Apple, Fujifilm, HTC, and Samsung for patent infringement. But, instead, Apple countersued Kodak for the same. It also tried to halt the sale of 13 Kodak patents that had been filed during the two companies’ joint development of the QuickTake camera, alleging they belonged to Apple and a spin-off company called FlashPoint.

Kodak is a company that has shaped our lives in ways we cannot explain. A large part of our childhood has had the presence of the company. Kodak made it possible to keep our memories secured with us. However, as they say, every good thing comes to an end!