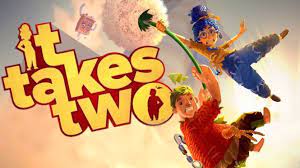 GTA’s parent company, Take Two has reportedly filed a trademark proceeding against Hazelight Studios’ new title, It Takes Two. The claimant had forced studio director, Joseph Fares, to abandon ownership over the game’s name because it rings too close to their company name.

Hazelight, the studio that developed It Takes Two with the support of Electronic Arts, abandoned the trademark application for the game name after receiving a trademark claim from Take Two Interactive Software. Hazelight had issued a notice of abandonment back on 25 March 2021, the day before It Takes Two’s launch on all platforms.  In a statement with Eurogamer, a Hazelight spokesperson said that the studio could not reveal any further details on the ongoing issues, but remains “hopeful it will be resolved.”

According to US Patent Office records, disputes use common terms such as “rock star,” “star rocks,” “mafia,” “social club,” and “Max Payne.” Take two claims that the company was trying to take advantage of its brand. Trademark law encourages owners to actively defend their brand or run the risk of losing it entirely, but gaming industry lawyer Eurogamer said in that approach, “Take-Two is being very, very aggressive” in its approach.