BEYONCÉ TRADEMARK – IS IT REALLY A THREAT TO BOLLYWOOD? 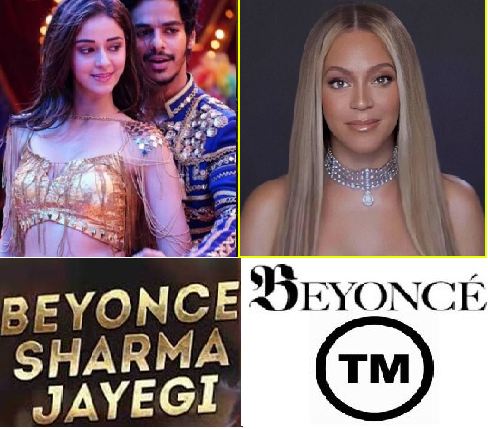 A bollywood movie namely, “Khaali Peeli” that is yet to be granted a theatrical or OTT platform release has attracted many IP-Holic and social activists including netizens behind the campaign “black lives matter”. The song titled ‘Beyonce Sharma Jayegi’ (later changed to ‘Beyonse Sharma Jayegi’) was whacked on the social media platform for its controversial lyrics. The song having an ensemble cast of Ishaan Khatter and AnanyaPanday, impliedly depicts Ananya Panday comparatively fairer than the US Singer Beyoncé with regards to the skin complexion.

The lyrics of the song “tujhe dekhke goriya, Beyonce sharma jaayegi” which, when translated to English reads as, “seeing you fair woman, even Beyonce would feel embarrassed”.

Upon receiving several negative feedback on social media, the makers of the song have amended the spelling of Beyoncé from ‘Beyonce’to‘Beyonse’ as a precautionary measure.

Did the boiling criticism end up here ? , In fact the use of the word “Goriya” in the songs have raised racist issues in light of raging Black Lives Matter.

Bollywood seems to be obsessed with fair skin and this is not the first time the word “Goriya” or “Gori” was used in the Bollywood song numbers. There are frequent examples which suggest that Bollywood is obsessed with fair skin. For instance, songs like Haseena Gori Gori, Churaye Dilmera Chori Chori; tenu kala chashma jachdahai, jachdahai ae gore mukdepe; white white face dekhe, dilwa beating fast and many more suggest that referring to a woman as “gori” is a traditional way to describe beauty.

Perhaps, on 25 June 2020, there was a very massive move by Hindustan Unilever Limited who announced to remove the word ‘fair’ from their ‘Fair & Lovely’ product line. Similarly, a few days before, Johnson & Johnson had announced that it will stop selling its ‘Clean & Clear ‘ fairness products in India.

Though, this might be treated as a step in support of the ‘Black Lives Matter’ campaign,Bollywood still seems far away from getting over their love for a ‘goriya’ or a ‘fair-skinned woman’. Film’s director Maqbool Khan and lyricist Kumaar openedtheir mouths after flack that the word ‘Goriya’ has been continuously used in the Bollywood song as a synonym to depict female gender. . They further added that they in any circumstances they did not intend to harm Beyoncé or any black people. However, an immoral act becoming a custom could in no circumstance be accepted as a new norm.

Glowing Celebrity Names as a Trademarks

Adele, Taylor Swift, Maryl Streep, Justin Bieber and Beyoncé are some other Hollywood celebrities who have successfully trademarked their names. However, that does not imply that their name cannot be used without their consent. For instance, if the name has been used for the “Creative Purpose” then it can be fair use under the Trademark Law. However, if the name has been used for “Business Purpose” the same can be challenged in the Court of Law.

Recently, in the matter of ,Mattel, Inc. &Anr. v. MS. AmanBijal Mehta &Ors. , the Hon’ble Delhi High Court denied relief to the plaintiff praying for restraining the defendant from using the trademark “BARBIE”. The Hon’ble Delhi High Court made reference to Nachiketa Walhekar Vs. Central Board of Film Certification where Hon’ble Supreme Court pronounced that “a film or a drama or a novel or a book is a creation of art. An artist has his own freedom to express himself in a manner which is not prohibited in law and such prohibitions are not read by implication to crucify the rights of expressive mind.” The Supreme Court further added that “freedom of speech and expression is sacrosanct and the said right should not be ordinarily interfered with”.

Both the judicial pronouncements depict the picture that a trademark can be used in the lyrics of the songs from the creative mind of view, not from the business point of view.

Concluding the legality in re usage of the word Beyoncé

By taking a glance at the general principle behind the trademark law, it is evident that the trademark acts as an identification mark for the public about the source of a goods or services. Further, the trademark is registered for a particular class or classes. In the present matter, “Beyoncé” is registered as trademark with the United States Patent and Trademark Office under the class 03, 16, 25 and 41 of NICE Classification and would cause Trademark Infringement only if it would be proved that using the trademark Beyoncé intends to cause confusion to the public that the song or performance was associated with Beyoncé in any manner.

In the present case, the film maker or lyricist had no intention of infringing the registered trademark “Beyoncé” by using the word Beyoncé in their song. This is not the first time where the Hollywood Singer’s or Actor’s name was used in the Bollywood songs. For instance, in “All Black” songby Sukhe and Raftaar the name of Brad Pitt is used in his lyrics which is a registered Trademark with the United States Patent and Trademark Office under the class 41 of NICE Classification.

It is concluded that the use of the name Beyoncé in a song lyric may neither fall under Section 29 of the Trademark Act, 1999 and nor amount to an infringement for the sole reason that the word Beyonce is not used as a Trademark and by mere perusal of the song it seems that it was not intended to cause confusion to the public that the song or performance was associated with Beyoncé in any manner would fall under the common law principle of “Doctrine of Fair Use”.

However, there is a possibility that the American singer- songwriter Beyoncé can file a defamation case against the filmmaker for depicting her comparatively darker than the Ananya Panday or can take action under the Copyright Law for using his name “Beyoncé”.